[[""Since 1970, the federal government has refused to recognize the medical value of marijuana. Marijuana is still a schedule one substance in their eyes, and so they have the “authority” to enforce their laws, even in medical marijuana states – states who voted for and who want medical marijuana.

On July 17, Representative Farr (D-CA), and 18 co-sponsors, introduced HR 6134, The Truth in Trials Act, which would fix this problem and allow people tried in federal court for marijuana related offenses to call upon evidence that they were in compliance with their state’s medical marijuana laws. It doesn’t matter if it’s illegal under federal law, you’re protected under Colorado law.

“Truth in Trials Act Protects State Medical Marijuana from Federal Prosecution,” July 19, 2012, by Drew Stromberg""]] http://ssdp.org/news/blog/truth-in-trials-act-protects-state-medical-marijuana-from-federal-prosecution/ (Quotes used under Federal Fair Use guidelines: for review or criticism for purposes of illustration or comment, and parody of some of the content of the work parodied; summary of an address or article, with brief quotations, in a news report) >>This comes from a "pro-weed" website, and even this website here admits I'm correct: Methinks the supporters on Amendment Two are too stoned to see this.^^**

GORDON RESPONDS: The Am.2 summary states the following: “Applies only to Florida law. Does not authorize violations of federal law or any non-medical use, possession or production of marijuana.” When read together with the entire ballot summary and title, these statements imply that qualifying patients may lawfully use and possess marijuana if the amendment passes. However, this is absolutely false. Whether or not this amendment passes, the medical use of marijuana will remain a prosecutable federal crime - that could get you arrested, charged, and prosecuted. Period.

PROOF: Read the ACTUAL Ballot Language here: http://www.floridasupremecourt.org/decisions/2014/sc13-2006.pdf Thanks to a Patriot friend, I am reminded that the FEDERAL LAW has jurisdiction and TRUMPS anything State - meaning that even if Florida's “Medical Marijuana” Amendment 2 passes, Feds will still legally be able to arrest, charge, and prosecute you for weed possession - period – PROOF:


Three medical marijuana dispensaries, one of their landlords and a medical marijuana patient bring the instant action to challenge recent threats by the United States Department of Justice (“DOJ”) to take legal action against landlords of medical marijuana dispensaries in the Northern District of California. The parties are now before the Court on Plaintiffs' motion for a temporary restraining order (“TRO”), which seeks an immediate injunction to prevent the federal government from arresting, prosecuting, or otherwise seeking sanctions or forfeitures against medical marijuana growers and providers who operate under the auspices of California's Compassionate Use Act of 1996. As will be set forth below, binding Supreme Court and Ninth Circuit precedent foreclose Plaintiffs' claims, and therefore, the Court DENIES Plaintiffs' motion for a TRO.1


Right or wrong (on moral grounds), U.S. Atty. General, Eric Holder, and crew, CAN and DO still prosecute: http://blogs.justice.gov/main/archives/192

SUBJECT: Investigations and Prosecutions in States Authorizing the Medical Use of Marijuana


This memorandum provides clarification and guidance to federal prosecutors in States that have enacted laws authorizing the medical use of marijuana...Of course, no State can authorize violations of federal law, and the list of factors above is not intended to describe exhaustively when a federal prosecution may be warranted...Your offices should continue to review marijuana cases for prosecution on a case-by-case basis, consistent with the guidance on resource allocation and federal priorities set forth herein, the consideration of requests for federal assistance from state and local law enforcement authorities, and the Principles of Federal Prosecution.

Besides being an illegal (unconstitutional) amendment, the ballot language is misleading (dishonest). Lastly, weed may be helpful, but remembering how thalidomide was “rushed” into the market, with deadly results, we need more research: Weed advocates should seek removal of 'Schedule 1' status, and not 'rush' things: Impatience can be deadly.

OK, now that we've gotten all serious & realised that I'm correct in my claims that this amendment contains deceptive lies –that could get you arrested (click the links to find out), here's a little humour:

Florida's Amendment 2
A well stoned militia, being necessary to the security of a police state, the right of the people to keep and bear weed, shall not be infringed.

NEW: Here's some additional weed research – some of it “anti-weed,” but also some of it “pro-weed,” which should show you that I'm open-minded –and not “prejudiced” against my weed-smoking, pot-head friends: 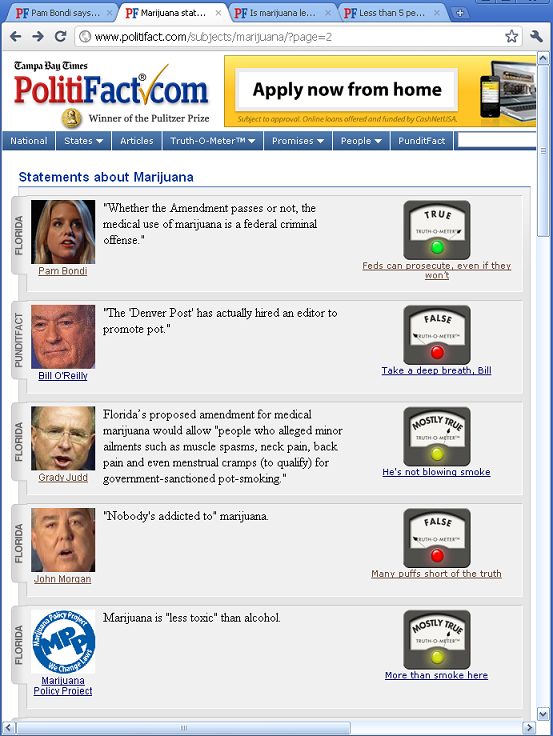 Note here that top item says: “Pam Bondi says medical marijuana is illegal under federal law, with or without amendment...Even with the caveats implied by the U.S. government’s recent guidance, Bondi’s office declared "whether the Amendment passes or not, the medical use of marijuana is a federal criminal offense." Whether you’re a supporter of states’ rights or not, she’s correct. [line break] We rate this statement True”

This confirms –and vindicates – my initial legal analyses; however, the bottom item (showing Marijuana is “less toxic” than alcohol) shows, clearly, that both PolitiFact (who published this) and myself (who is citing it here) are not narrow-minded “haters” of weed. While weed, indeed, is not that healthy, I am an unbiased and honest “Ron Paul” Republican who admits that it is less harmful than alcohol.

Here are additional citations that show I am not a “hater” of Liberal or Democratic causes (Civil Rights for African Americans) or prominent Democratic Leaders (Pres. Barack Obama) → 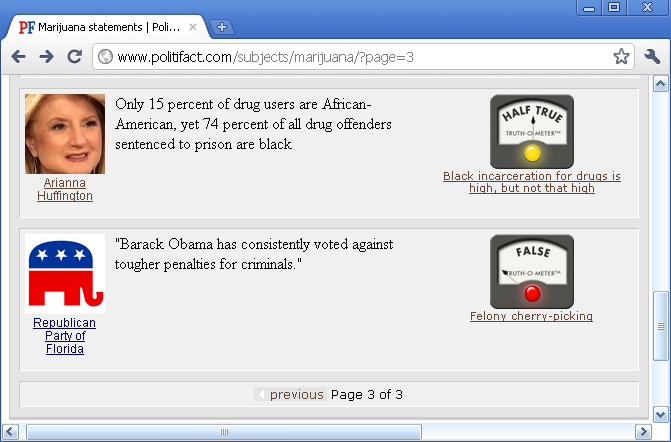 ( LEGAL DISCLAIMER: Selected screen-shots from the PolitiFact 'fact checker' website, cited & used under Federal Fair Use guidelines: for review or criticism for purposes of illustration or comment, and summary of an address or article, with brief quotations, in a news report – THIS news report, to be exact. )


Lastly, see the last page following: Here are still more citations that show I am not a “hater” of Liberal or Democratic causes: I cite some items that support traditionally liberal, Democratic, and/or pro-weed claims... 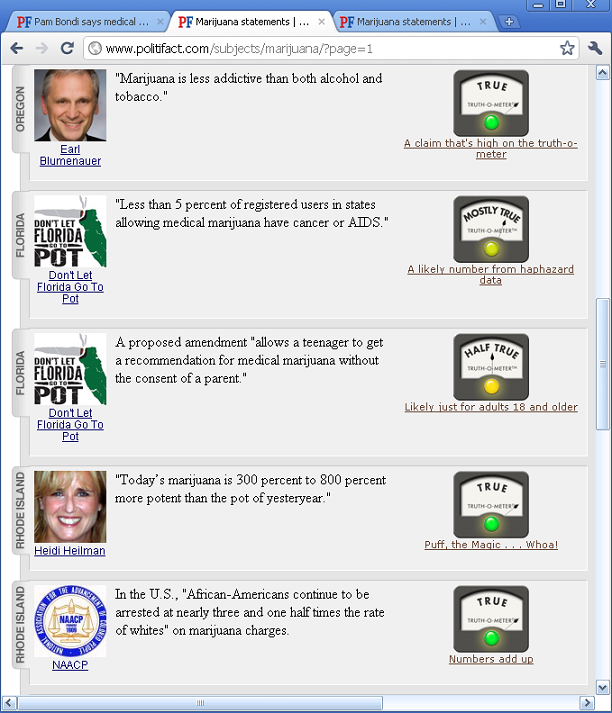